Slovakia has made a serious progress in 100 years

Ceremonial address of Miroslav Fikar, the Rector of STU, on the occasion of celebrating the 100th anniversary of the Comenius University establishment in Bratislava

We use centuries to measure epochs in history. 100 years is a period exceeding a single human life. When commemorating the 100th anniversary of the Comenius University establishment and 100 years of its existence, we actually state that each historical epoch and each great institution is always a collective work resulting from the effort of a big group of people of different generations. Standing here and now, we gratefully look back into the past with a hope and responsibility for the future that is to be shaped by us. 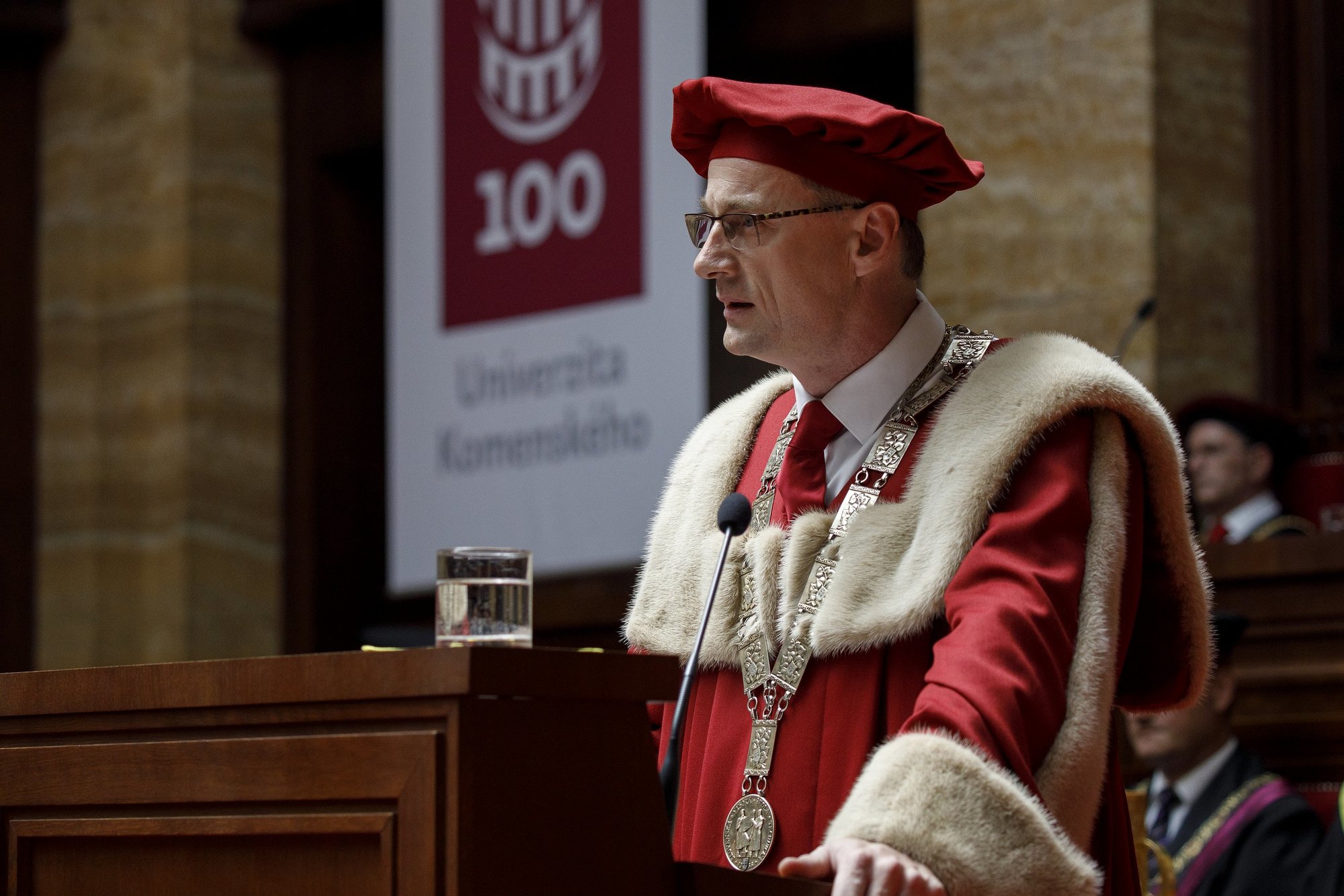 “If I have seen further, it is by standing on the shoulders of giants” said the renowned scientist Sir Isaac Newton more than 300 years ago, thus expressing a great truth: university and science primarily mean a community of devoted people. They both represent the most useful manifestation of a self-confident, inquisitive and joyful attitude to the world. Having arisen out of the devotion and gifts of the generations before us, the University and science, have themselves become a gift for humanity.

Establishment of the Comenius University in June 1919 can be also perceived as a gift presented to us in the first months of the new state. We can also perceive the very foundation of the first Czechoslovak Republic as a geopolitical gift of the then great powers to the peoples and nationalities in the Central Europe, who freely defied their independence and ambition in the World War I and formed a new state on the ruins of the Austro-Hungarian Monarchy.

Those were the great and memorable days for the first Czechoslovak Republic:  on 27 June 1919, the first Slovak university was established by the decree of the National Assembly in Prague, and only a day later, on 28June 1919 in Versailles near Paris, Czechoslovakia signed the peace treaty which became the basis for international recognition of the new state.

The fact is that both, the Republic and the University were founded in literally combat conditions: the World War I was over; yet shooting could be still heard. The establishment of the Comenius University is therefore still considered as the expression of enormous energy, courage and self-confidence of the State founders.

Generosity and community seem to be the key to great results in both politics and science. The Comenius University started 100 years ago; initiated by a few individuals and built under modest conditions, it managed to educate new generations of students.

Yet, the building effort connecting people whenever something new comes up disappears naturally after 100 years. 100 years ago, there were no universities in Slovakia, and almost no scientists. Today, there are more than 30 universities with more than 15,000 researchers. Everyday life prevails over revolutionary changes:now, we are much farther, facing new challenges, fulfilling new tasks, tackling new problems and trying to respond the basic questions: What shall we do about it? Where shall we advance?

Slovakia has advanced a lot in 100 years; we are a successful and self-confident country that no longer needs to fight for national emancipation and its own state, trying to build high education on a green field. Our current task is to connect our universities and science with those all over the world, to show that we are here and able to compete with the best ones. Today, there is nothing to obstruct our world ambitions.

We should more frequently commemorate the quotation of Milan Rastislav Štefánik, our famous scientist and politician:  “Small nations can only succeed in the world through their culture and scientific knowledge.” I am very pleased to state that three largest scientific institutions in Slovakia, Slovak University of Technology, Comenius University and the Slovak Academy of Sciences have adopted this legacy and, by signing the Memorandum on Cooperation, committed to take steps to meet the international ambitions of the Slovak science.

Dear Ladies and Gentlemen. Natural resources such as gold or oil are limited in Slovakia; yet the country is rich for extremely skilled and educated people. The development of universities and scientific research is the way to ensure a better future for the country. Knowing it, we realize that it is up to us now. Therefore let me finnish now and ask once again: What shall we do about it? Where shall we advance?