Did they find the key to high superconductivity temperatures?

The discovery of our scientists could swiftly move us closer to superconductivity at the room temperature, which would be of great importance. Where could it be used and what does it mean to us? Maybe a lot.

Superconductor is a material of exceptional electrical and magnetic properties. Imagine the electric current flowing through the superconductor cable for an infinite period of time. Though transmitting five-times more power than a common electric one, the cable does not heat up. Or, just imagine super-fast trains hovering above the ground at a speed of nearly 600 km/h. Not less tempting is the idea of a super-powerful quantum computer processing a vast amount of information simultaneously. Undoubtedly, the most important application of superconductors so far is in medicine. The diagnostic method of MRI (Magnetic Resonance Imaging) detects the smallest pathological changes in the human body without invading it, thus saving many lives worldwide every day.

The only problem is: too low temperature. Will it change?
It sounds great, except one big difficulty. Superconductivity can only be achieved at extremely low temperatures, and therefore all devices involved require constant cryogenic cooling. That is also the key reason why conventional electrical cables in our households have not been replaced yet by superconductors. The situation would change radically if we discovered a material superconducting at the room temperature. It is not clear how to do it so far, since we still do not fully understand superconductivity. In other words, we miss a scientific theory that would reliably predict whether or not the material will be superconductive. The scientists therefore wholly depend only on the trial-error method while relying on the well-known similarities.

Regarding the above-mentioned, the copper and oxygen-based ceramic materials represent the most significant family of superconductors discovered so far. It is the largest group of materials reaching superconductive state at the temperatures approaching that of the liquid nitrogen (= 77 K). In the world of superconductivity, it is unusually high, so they are referred to as high-temperature ceramic superconductors. Their immense importance lies in their distinctive features. Scientists believe that achievement of those characteristic features in other materials will lead to the discovery of a new family of superconductors. They have already identified a hot candidate: a crystal composed of the silver and fluorine atomic layers, silver fluoride AgF2.

The international team consisting of the researchers of STU MTF and several institutions of the EU countries and USA have been researching the silver and fluorine materials for a long time. In their latest study, they pointed out that the materials of the appropriate combination of the above-mentioned elements exhibit striking similarity to, or are even better than, the ceramic high-temperature superconductors. In January this year, the scientists introduced their latest hot candidate with the potential to surpass the record of superconductivity temperature of ceramic superconductors. Their study was published in PNAS (Proceedings of the National Academy of Sciences of the United States of America). 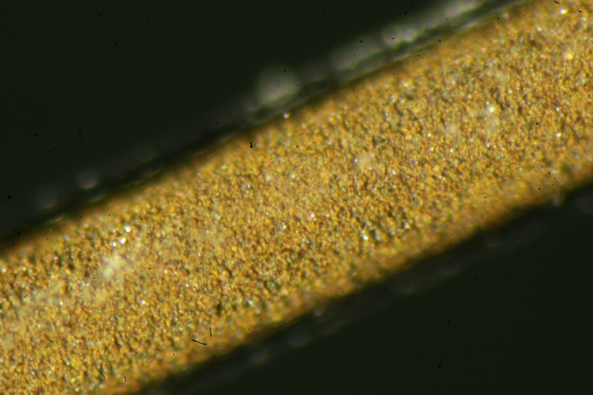 The photograph presents a detail of the polycrystalline sample of AgF2, a hot candidate for the precursor of a new family of high-temperature superconductors (source: Centre of New Technologies of Warsaw University).

Scientists have been looking for a new layered material with the atomic layers resembling a chessboard. Consisting of the copper and oxygen atoms (see below), an atomic chessboard is a typical structural feature of high-temperature ceramic superconductors. When it was discovered in the material consisting of silver and fluoride (AgF2), the scientists focused on the behaviour of the electrons in it, which were found to behave very similarly to those in superconducting ceramic materials, i.e. as small magnets extremely attracting each other. However, the greatest encouragement is that the interactions are much stronger when the layers are smooth (even), since they are wrinkled in the AgF2 material. The scientists believe that the huge magnetic interactions in layered materials are the key to high temperatures of superconductivity. AgF2 is the first serious candidate which, after doping, is expected to achieve even a higher temperature of superconductivity than the current famous ceramic superconductors.